I’ve tried to downsize the amount of clothing I bring along with each trip I take.  The last few trips with the exception of the China trip were packed into a 22 inch carryon size suitcase. I also used my smaller backpack (a regular school size) as my carry-on which held two large brim sun hats (I was also trying to be less “the quintessential American tourist” by giving up my plain black baseball cap).  The effort to bring along less has been a goal of mine for several of my past trips, but I’ve never resorted to the ultimate travel hack–laundry in the hotel sink.

I’ve worn pants or skirts more than once, but never shirts or undergarments.  I decided to not bring too much along to Italy.  I had 3 pairs of pants (including the pair I was wearing), 1 skirt, and 6 shirts and 2 tanks.  That’s still a lot of clothes, but I was away for 9-10 days and I would need to do laundry along the way.  If I was packing again today–I would leave the skirt home and bring either shorts or capri pants–as there were 1 or 2 warm days in Rome.  I had an extra pair of shoes and will leave them home next time–they gave me a blister–up to this point I was blister free in my shoes (Skechers Bob’s Chill slip on shoes with memory foam).

Four of the shirts needed (well I needed them to be) to be layered with my camisole tanks.   I had a gray zip hoody to use as a light jacket.  I had two scarves to accessorize the outfits.

I arrived in Italy on Saturday and by Tuesday-Wednesday I needed to do a small load of laundry.  I picked up a rubber sink stopper and single use packets of Woolite and a Lewis & Clark clothesline from Amazon before my trip.  The stopper was in case the sink didn’t have an operable stopper (I never considered that until I was looking at the Amazon website).  The clothesline is great because it has both rubber suction cups (which are kind of useless) AND velcro straps that can be wrapped around towel racks across the bathroom.  I had a small bathroom and I was able to stretch the line from one wall to the other as both walls had towels racks.  I did have to be careful now –night-time bathroom visits now hold the danger of clotheslining myself!  The clothesline doesn’t need pins because it was braided–you just slip the clothes through the opening.  I was able to hang a tank, t-shirt, a bra, 2-3 pairs underwear, and a pair of compression socks.  The pants and the heaviest shirt I hung on the chair out on the balcony.

The upside–I had cleaner clothes than if I just sprayed them with Refresh (I did that as well), but the downside–was that it took 2 days for the clothes to completely dry.  Good thing I sort of planned my outfits so that the clothes washed were not needed for 2-3 days.  I’ll probably have my little laundry kit with me just in case on future trips!

My last trip was to Italy for the very first time.  The food was simple, fresh, and so tasty.  I’m a picky eater, so I usually bring some snacks to help me supplement my meals on trips in case I have a hard time finding things I like.  In Italy–finding tasty food was never a problem.  My ten days were a carb fest–pizza, pasta, and gelato.  I like to think of it as the holy trinity in Italian foods.

Gnocchi with a four cheese sauce

Neapolitan pizza in Naples with a regional beer. 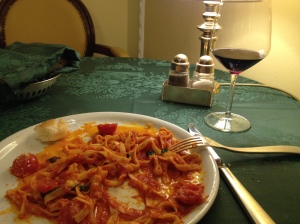 Egg noodles with a tomato and basil sauce. Cherry tomatoes were halved and put around the dish. Very simple and no heartburn! 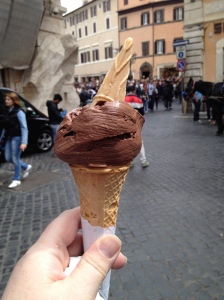 Chocolate gelato–simple but oh so good! Had it almost everyday either for lunch or after dinner.